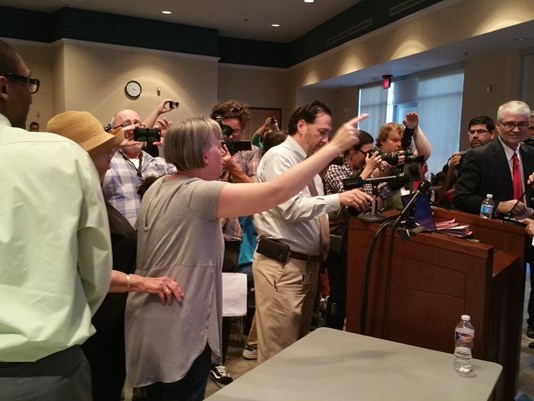 No Comments on My Craziest Two Weeks EverPosted in Iron Sharpens Iron, Retreats, Speaking Events By Michael SpraguePosted on March 21, 2017

You never know when you are going to get to lift-up the name of Jesus to two-million plus people, but it happened to me over the last couple of weeks. I could never imagine that a request to give the 90-second invocation at a town hall would create a firestorm across the country, and I would be dubbed as the “THEY BOOED JESUS” CHAPLAIN on media and in newspapers across the country. I found myself appearing on “FOX AND FRIENDS,” “FOX BUSINESS NEWS RISK AND REWARD” and numerous national radio programs, as well as several interviews by print media. 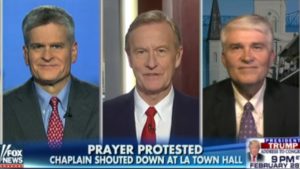 Opportunities continue to come. Paul’s words have resonated deep in my spirit, “preach the word, be ready in season and out of season” and “for I have determined to know nothing among you except Christ and Christ crucified.” Pray good continues to come out of bad. 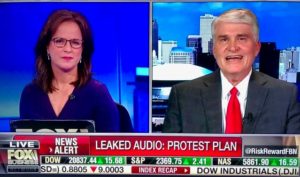 If you want to see a clip of the “Booing Jesus Prayer,” you can see it in the “Resources” section of this website.

What follows is my editorial that was published in the Advocate, Louisiana’s largest newspaper:

JESUS EMBRACED HIS PROTESTORS, TOO
I was asked to offer the invocation at Senator Bill Cassidy’s recent town hall meeting in Metairie. My prayer was drowned out by screaming and yelling, shouts of “Lucifer” and climaxed with a deafening roar when I concluded with “in Jesus name, I pray, Amen.” Media picked up on the phrase, “They booed Jesus.” This led to a firestorm of controversy and conversation across America. I would like to offer an understanding of my response to the protesters and the national conversation.

I’m frequently asked if I’m mad at the Protesters and Disrupters. I am not mad at anyone. The truth is, Jesus was booed many, many times. One time Jesus heard people cry “Crucify him, Crucify him.” His response was “Father, forgive them. They do not know what they do.”

When I prayed “in Jesus Name” I wasn’t using Jesus’ name attached to a political or religious agenda. I was simply praying to a real person named Jesus who says, “Love your enemy, care for the poor and turn the other cheek.” Jesus hates hypocrisy. Jesus sacrificed His all so that all people might have peace with God and with each other. His weapons are not rage, knives or hatred, but rather a blood-stained cross, an empty tomb, scars on his back, a serving towel, and a bunch of rag-tag followers who despite their flaws, ended up leading a revolution of love that changed the world.

Jesus said to the naysayers, “Anytime you are ready…Come to me, you who are weary and heavy-laden, I’ll give you rest for your soul.” You see, Jesus loves Protestors.

I’m convinced the town hall meeting reflects the need for two things. First, a spiritual awakening is needed in America. We have drifted. Many sense it. Let’s get back to our National motto “In God We Trust.” Even a dialogue around “Who do you say Jesus is?” can be enriching. Certainly, Jesus is not a Republican or a Democrat. He is not a political chip to play or a religious mascot.

Second, we need a national awakening of civility and respect in America. A quiet majority collectively wants us to better our listening skills, dialogue constructively, discover common ground, find solutions and cut out the demonizing and stereotyping. This ugly town hall meeting is not who we are. We can do better. Some may boo but many may cheer.

My Craziest Two Weeks Ever