No Comments on My Answer for Times of Political Turmoil and FearPosted in Baton Rouge, LA Capitol, Prayer By Michael SpraguePosted on June 2, 2016

“Let’s say there is a ship on the high sea, having a fierce struggle with the waves. The storm wind is blowing harder by the minute. The boat is small, tossed about like a toy; the sky is dark; the sailors’ strength is failing. Then one of them is gripped by … whom?  what? … he cannot tell himself. But someone is there in the boat who wasn’t in the boat before …. suddenly he can no longer see or hear anything, can no longer row, a wave overwhelms him, and in desperation he shrieks: ‘Stranger in the boat, who are you?’ And the other answers, ‘I am Fear…all hope is lost, Fear is in the boat.’”

The German people could all relate. Germany was in turmoil. The devastation from Germany’s defeat in WWI lingered. The economy struggled and the unemployed reached 6 million. The nation lacked stability, confidence and leadership. The fear of communism and extremism was everywhere. Germans lived in FEAR. Fear was in the boat. Fear was in the church. Who would the people look to for help?

The choice was made by the vast numbers of countrymen and churchgoers 15 days after Bonhoeffer’s sermon as they chose Adolf Hitler as their next Chancellor. Hitler exploited the dire situation, paralyzing fear with strength of personality, a persuasive tongue and a promise to make Germany great again. In essence, he asked the people to pick a savior: himself. As Bonhoeffer warned, fear drove Germans to division, pain, hopelessness and desperation. Fear leads people to take shortcuts, believe lies, pollutes judgement, demonizes people groups, causes men to think the worst of their neighbor, believe conspiracy theories and lose trust in God. Fear has this same effect today. The truth is the people will be driven by fear or faith.

Today, everyone senses dire conditions and the storm clouds gathering on the horizon. Think of the following dark clouds:

Did I miss anything? Fear is in many and sometimes the church fuels the fear.

Bonhoeffer called his flock to navigate the tempestuous waters of life with faith. Jesus said in Matthew 8, “Why are you afraid, you of little faith? Then He got up and rebuked the winds and the sea; and there was a dead calm.” Bonhoeffer said, “Then it is as if the heavens opened, as if the heavenly hosts themselves raised a shout of victory in the midst of the hopelessness: Christ is in the boat. Christ is in the boat, and no sooner has the call gone out and been heard than Fear shrinks back, and the waves subside. The sea becomes calm and the boat rests on its quite surface. Christ is in the boat!”

Bonhoeffer calls every one of us to hear Jesus say, “I am in your boat!” Without this voice 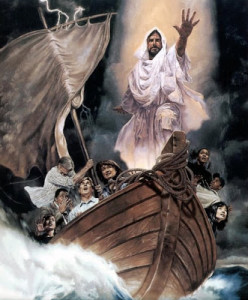 being preeminent we will listen to lesser voices. Driven by fear, our hope becomes politicians, slogans, man-made revolutions, armies and our own ingenuity. Be careful. Don’t be afraid. Jesus is in the boat in our storm. May the church be a lighthouse that guides people away from the rocks. May we live in these stormy and perplexing days with a God-confidence, joy and unwavering courage so that once again the world wonders, “What sort of man is this?” May our world be once again turned upside down by the ONE who revives, revitalizes and renews individuals, communities and even nations. Amen.

1.   Pray for significant faith conversations as the regular Louisiana Legislature session wraps up on June 6 at 6:00pm. The Governor has called for a Special Legislative Session to begin June 6th at 6:30pm and meet through June 23.  Leaders need God’s help!

2.  Pray for me as I teach for eight days at the end of June at Officers Christian Fellowship in White Sulphur Springs, Pennsylvania.

My Answer for Times of Political Turmoil and Fear