I just started my eleventh year of Louisiana Legislative Sessions at the Capitol in Baton Rouge. It is a joy to encourage and pray for leaders in the Capitol community. Time marches on. I may have quite a bit of snow on my rooftop, but I still have a flame burning in my furnace. I never have gotten over the buzz of talking to someone about the person of Jesus Christ.

This past week I had a number of lengthy conversations with leaders about their life and next faith steps. It never gets old. I truly cannot wait to see what God is going to do in people’s lives. My job is to point people to Jesus and leave them with Him.

It was said of George Muller, the man who ran so many orphanages by faith alone, “He delighted in God.” That is who I want to become. I have outgrown gimmicks, fads, programs, political messiahs, and I hope religiosity. My motto remains, “Bet the Farm on Jesus.” I simply want to be in the middle of where the wind of the Spirit blows.

Pray for my time at the Capitol between now and June 10. Legislators have significant work to do. It can only be done well with the wisdom, courage, and strength of the Lord. I often share Psalm 20 with leaders, “Now this I know: The Lord gives victory to his anointed. He answers him from his heavenly sanctuary with the victorious power of his right hand. Some trust in chariots and some in horses, but we trust in the name of the Lord our God. They are brought to their knees and fall, but we rise up and stand firm. Lord, give victory to the king!”

Something to Think About

Every few years while visiting Washington, D. C., I go with a group to the National Cathedral where we view, among other things, a very moving statue of Abraham Lincoln poised on his knees in prayer. The statue represents a type of moral leadership that is needed in every generation … especially in turbulent times. 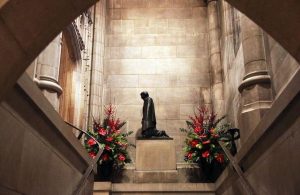 In 1862, the war was not going well for the Union, and Lincoln was being savaged in the press, both North and South. The news stirred anxiety, anger, and attacks. Personal tragedy struck his family when his beloved son Willie died suddenly. Lincoln said, “My own wisdom seemed insufficient,” I was “driven many times upon my knees by the overwhelming conviction that I have nowhere else to go.” There were no easy answers. He resigned himself to God’s providence.

The horrors of a divided nation forced him to seek refuge in God and provided an almost unexplainable peace. When General Lee marched 76,000 troops into Pennsylvania, panic consumed Washington D. C., yet the President was at peace. General Daniel E. Sickles questioned the President on how he was able to function in that high stress situation and make great decisions. Lincoln said, “When everybody seemed panic-stricken and nobody could tell what was going to happen, oppressed by the gravity of our affairs, I went to my room one day and locked the door and got down on my knees before Almighty God and prayed … And after that, I do not know how it was, and I cannot explain it, soon a sweet comfort crept into my soul that God Almighty had taken the whole business into His own hands.”

In our divided nation may our leaders govern out of the same kind of dependency and providence Lincoln found essential. May we, the American people, do the same.

Pray for the Community-wide Leader Faith Forum on February 22nd, 7:30-8:30am. All are invited. Statewide elected leaders, Senators and Representatives and local officials will participate in this event designed to pray for our Leaders, State, and Community.