No Comments on Nine Years Ago TodayPosted in Uncategorized By Michael SpraguePosted on September 6, 2014December 30, 2015
Do you know where you were nine years ago today? I vividly remember. Never in a million years did I expect to live through the greatest natural disaster in American history: Hurricane Katrina. Yet, in the midst of catastrophe, beauty comes out of the ashes … lives are utterly transformed … miracles happen. I wouldn’t wish a disaster upon anyone, but I wouldn’t trade what I’ve learned and have become for anything. Out of my brokenness has come a liberation and freedom.
Recently, I’ve been meditating upon the Apostle Paul’s STORM, SHIPWRECK and SNAKEBITE travel log in Acts 27-28. At outward appearance the voices of the day saw Paul’s calamities as God was out to get him. However, a look through the Sovereignty and Providence of God-lens revealed something far different: 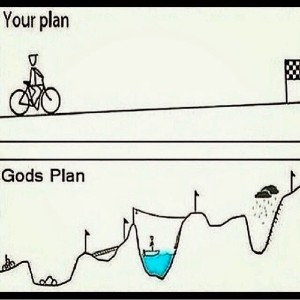 1. Closed Doors are often just Divine Detours.
2. God’s guides by a zig-zag and not a straight line
3. God sometimes takes us off-course to keep us on-course.
4. At times our plans need to fail so God’s plans can win.
5. If you want to make God laugh, tell Him too many of our plans.
6. God is never early, never late, He’s right on time every time. You can trust His timing.
7. There are no coincidences, only providence. No twist of fate, only divine appointments.
If Paul would have tried, as a preacher-boy or a jailbird, to get an appointment with Governor Publius of Malta or Nero of the Roman Empire, it would have been impossible. Yet, SUFFERING, a STORM, a SHIPWRECK and a SNAKEBITE changed everything. Is it no wonder an angel would tell Paul beforehand, “Do not be afraid Paul, you must stand before Caesar” (Acts 27:24)? This was all part of the fulfillment of Paul’s calling to be a chosen instrument of Jesus to bear His name to Jews, Gentiles and Kings.
Nine years after Katrina I can’t miss God’s sovereignty and providence in my life. I’ve experienced a few rogue winds, shipwrecks and snakebites in order for God to get me where he wants me. If I would have asked for an appointment with elected officials nine years ago they would have probably laughed, and I would have had nothing to say. I think back upon this last month alone. I have had more key appointments with elected leaders, pastors and business leaders than I’ve had in any other month. Only God could open these doors to have me at this place, in this time, in these ways.
Paul finished his Capitol Commission calling. By 60 AD the message of Jesus had reached the highest echelons of power in the empire. It was so extensive Paul could send greetings from those in Caesar’s own household. Paul had reached out to the capital cities of Cypress, Pamphilia, Galatia, Lyconia, Macedonia, Greece, Achaia and Proconsular, Asia as recorded in the book of Acts. Today, our ministry and those I work with around the state and country are reaching a new generation of political leaders in state capitals, Washington D.C. and local officials by focusing on Jesus Christ and the timeless Word of God.
Praise and Prayer

1. Praise for a good speaking engagement at a Capitol Commission gathering with community and legislators in Springfield, Missouri on September 4.

2. Pray for the establishment of a North Shore Leaders Forum targeted to launch October 29. Pray for the Prayer Breakfasts in St. Tammany and Jefferson Parish on September 19 and October 24. Pray for the Men’s retreat on September 26-28. A few slots are still open.
3. Pray for a God revitalization in our country. Most of our problems are spiritual and family related. Laws cannot transform hearts. Jesus can.
4. Pray for strength for Donna and pray for Jonathan as he travels to do consulting in Chicago for three months or so.
Betting the Farm on God,
Michael
Nine Years Ago Today