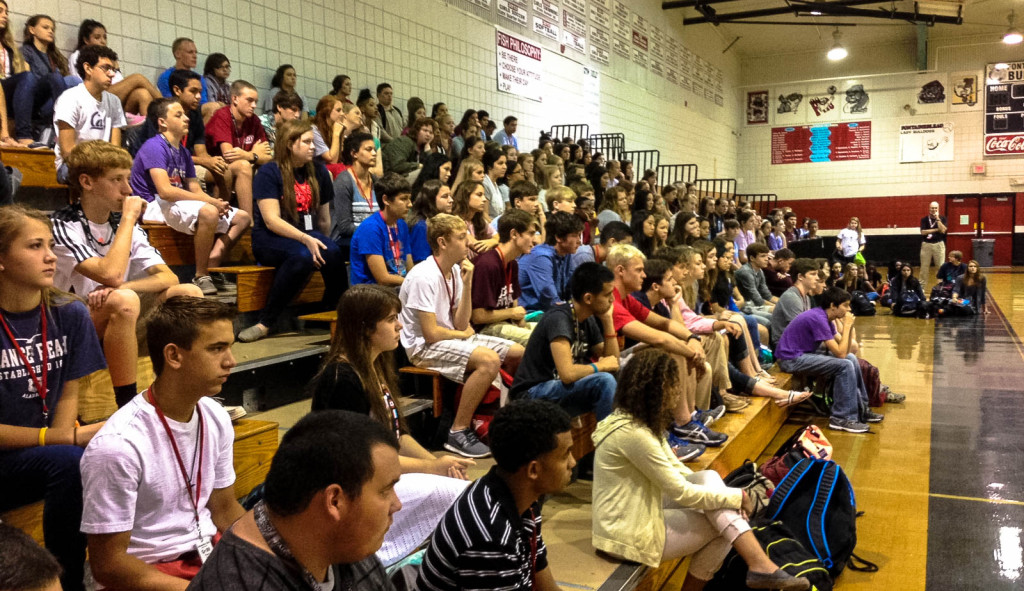 So, I am out power-washing my house and a high school senior who I didn’t know comes into my yard and we got to talking. During the conversation, he asks me to speak at his public high school club three times to three different groups. “Ok,” I say. He calls to confirm and I say, “What’s my topic?” He says, “What is Christianity?” It doesn’t get any better than this! What a day I had with high school kids. I thank God for school clubs, Next Generation Club and the power of pizza. I told them I wasn’t much into religion, but Jesus … that’s the best story in the world. 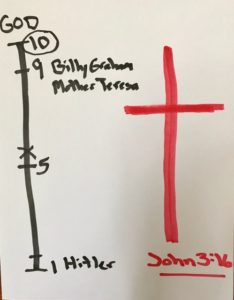 I decided to engage them in a thought-provoking exercise. I asked them to think about this question, “Outside of biblical figures, who are the worst and best persons who have ever lived in the last 100 years?” The worst person was easy for the group. Who do you think they said? Hitler. The best person question created quite a discussion. Someone yelled “Gandhi!” Others immediately chimed in with Martin Luther King, Mother Teresa, and Billy Graham. We narrowed the list down to Mother Teresa and Billy Graham. Then I said, “Let’s set up a humanity goodness scale of 1 to 10. Hitler is a 1 and Mother Teresa and Billy Graham are a 9.” They agreed that none of their candidates for best person was perfect. Next, I asked the group to put themselves on the goodness scale based on how they’ve lived their life. I encouraged them not to be too hard on themselves. No one was down with Hitler, but probably none of us would be up there with Mother Teresa or Billy Graham either. “How good are you?” I asked. “What’s your number?” What do you think most people say they are? A five. I once had a guy in prison say he was a 7.5. He had a high opinion of himself! I had one more question for the group. “Biblically speaking, where does God draw the line when He decides who goes to heaven and who goes to hell? What number does God require if you are to merit heaven on your own goodness? How righteous do you have to be?” The room turned silent. They were thinking now. I had them where I wanted them. They were all ears. Secretly, some were hoping I would say a number that was just under their self-analysis number. Many longed for a God who would grade on the curve. I held back a little and let the significance of the question sink in. I finally gave the answer. “The Bible says for a person to merit heaven … to merit a personal relationship with God … to have earned eternal life … a person has to be a perfect 10.” This question often brings a gasp from the room. Instantly the question comes to mind, “Who can be saved? Is there any hope?” Bingo! In understanding the bad news, they were ready for the good news. Next to the goodness scale I drew a big red cross and said, “What we could never do for ourselves, God made possible through Jesus Christ. His Son died on a cross for our sins so that, through faith in Jesus, we could stand before a holy God, not on our merits, but on the merits of His Son, Jesus. By placing faith in Christ, our sins are forgiven and we receive spiritual life and eternal life. Think of it – a personal relationship and peace with God comes through faith in Christ, not by our works or religion. That is GOOD NEWS!” 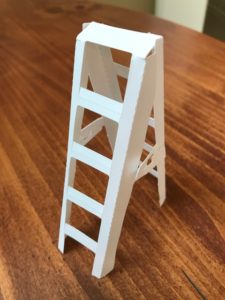 I had also given every student a card stock paper illustration that when punched out and built turns into a ladder. Every religion in the world thinks you must climb the ladder to get to God … in full or in part salvation comes by your own self effort. Genuine Christianity is totally different. You need to throw away the SELF SALVATION LADDER PLAN and accept the GRACE PLAN though trusting Jesus alone. The GOOD NEWS! I love sharing this message with elected leaders, business leaders, high school students or whoever will listen. 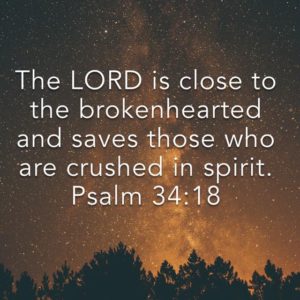