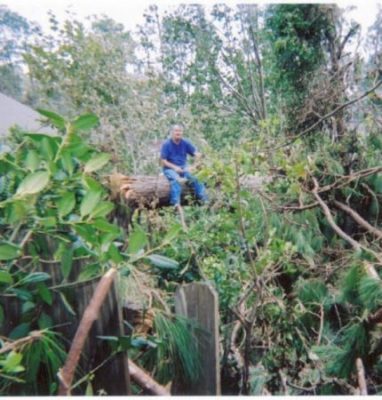 No Comments on Is Your Life as Crazy as Mine?Posted in Baton Rouge, Iron Sharpens Iron, National Day of Prayer, Speaking Events, Uncategorized By Michael SpraguePosted on August 16, 2019August 16, 2019

Do you know where you were 14 years ago? (I’m talking August 29 to be exact!! YES, that is me sitting on the top of the devastation in my back yard.)

I vividly remember. Never in a million years did I expect to live through the greatest natural disaster in American history: Hurricane Katrina. In the midst of catastrophe, beauty comes out of the ashes …. lives can be transformed …. miracles happen. I wouldn’t wish a disaster upon anyone, but I wouldn’t trade what I’ve learned and have become for anything. Out of my brokenness has come a liberation, a calling and a freedom.

In meditating upon the Apostle Paul’s STORM, SHIPWRECK and SNAKEBITE travel log in Acts 27-28 one might think at first glance that God must be out to get him. However, a look through the Sovereignty and Providence of God-lens reveals something far different: 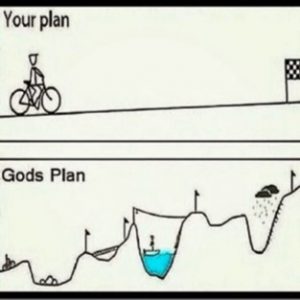 If Paul would have tried, as a preacher-boy or a jailbird, to get an appointment with Governor Publius of Malta or Nero of the Roman Empire, it would have been impossible. Yet, SUFFERING, a STORM, a SHIPWRECK and a SNAKEBITE changed everything. Is it no wonder an angel would tell Paul beforehand, “Do not be afraid Paul, you must stand before Caesar” (Acts 27:24)? This was all part of the fulfillment of Paul’s calling to be a chosen instrument of Jesus to bear His name to Jews, Gentiles and Kings.

Fourteen years after Katrina I can’t miss God’s sovereignty and providence in my life. I’ve experienced a few rogue winds, shipwrecks and snakebites in order for God to get me where he wants me. If I would have asked for an appointment with elected officials 14 years ago they would have laughed, and I would have had nothing to say. If you would have told me even 10 years ago that I would be pastoring leaders rather than being a Senior Pastor I would have thought you were crazy.

I have more opportunities then I can ever imagine. I often pinch myself over the key appointments with elected leaders, pastors and business leaders. When many at my age are sliding for home, I’m believing my best days are ahead. Only God could open these doors to have me at this place, in this time, in these ways.

Paul finished his Capitol Commission calling. By 60 AD the message of Jesus had reached the highest echelons of power in the empire. It was so extensive Paul could send greetings from those in Caesar’s own household. Paul had reached out to the capital cities of Cypress, Pamphilia, Galatia, Lyconia, Macedonia, Greece, Achaia and Proconsular, and Asia as recorded in the book of Acts. Today, the ministry of Capitol Commission Louisiana is reaching a new generation of political leaders in state capitals, Washington D.C. and local officials by focusing on Jesus Christ and the timeless Word of God.

The late summer and early fall months are filled with increased speaking opportunities, personal contact and Bible studies. Election season is in full swing. There will be record breaking numbers of new legislators getting sworn in at the Louisiana State Capitol. This opens up unprecedented opportunity to share the person of Jesus Christ with leaders. Our Louisiana Governor’s Prayer Breakfast has just received a commitment from Barry Black, Chaplain of the U.S. Senate, to be our Keynote Speaker in March. Perhaps some of you could join me for this event to kick-off the 2020 Legislative Session. On Sunday, September 8th, I will be preaching in the Washington, DC area at Countryside Fellowship Church in Savage, Maryland at 10am.

Is Your Life as Crazy as Mine?